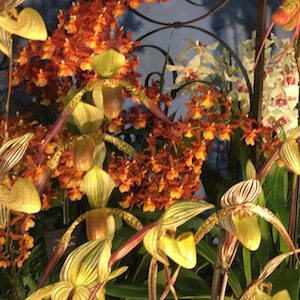 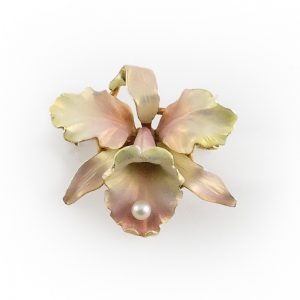 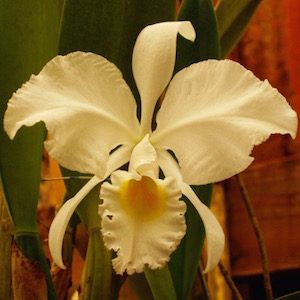 Around 1900, Newark, New Jersey, was considered to be the USA capital of jewellery. The majority of pieces were made of 14k gold, embellished by skillfully applied polychrome enamels with only occasional gemstone accents. You can read more about the Newark group in this Dupuis article.

The Cattleya Orchid is one of the most beautiful orchids in the world. They are also known as “Jewels of the jungle” and “Queen of the orchids.” The history of the regal Cattleya, also known as the “Corsage Orchid”, dates back to the early 19th century when William Cattley first successfully grew this orchid in cultivation.

If you’re interested in learning more about the flower itself, visit the website of the American Orchid Society.

The phrase faire cattleya, meaning “to do a cattleya,” is used as a botanical metaphor for amorous fondling in the novel ‘In Search of Lost Time’, by  Marcel Proust (1871–1922).  Volume I: Swann’s Way includes a story of Charles Swann’s love affair with Odette de Crécy.

…”He was so shy in approaching her that, after this evening which had begun by his arranging her cattleyas and had ended in her complete surrender, whether from fear of offending her, or from reluctance to appear retrospectively to have lied, or perhaps because he lacked the audacity to formulate a more urgent requirement than this (which could always be repeated, since it had not annoyed her on the first occasion), he resorted to the same pretext on the following days. If she had cattleyas pinned to her bodice, he would say: ” It’s most unfortunate; the cattleyas don’t need tucking in this evening; they’ve not been disturbed as they were the other night. I think, though, that this one isn’t quite straight. May I see if they have more scent than the others?”Or else, if she had none: “Oh! No cattleyas this evening; then there’s no chance of my indulging in my little rearrangements.”
So that for some time there was no chance in the procedure which had followed on that first evening, starting with fumblings with fingers and lips at Odette’s bosom, and it was thus that his caresses still began. And long afterwards, when the rearrangements (or, rather, the ritual pretence of a rearrangement) of her cattleyas had fallen into the desuetude, the metaphor ” Do a cattleya” transmuted into a simple verb which they would employ without thinking when they wished to refer to the act of physical possession (in which, paradoxically, the possessor possesses nothing), survived to commemorate in their vocabulary the long-forgotten custom from which it sprang. And perhaps this particular manner of saying “to make love” did not mean exactly the same thing as it synonyms… “—as it might have seemed to the first man when he enjoyed it amid the flowers of the earthly paradise—a pleasure which had never before existed, which he was striving now to create, a pleasure—and the special name which he was to give to it preserved its identity—entirely individual and new…” Link if you like to read the entire novel.