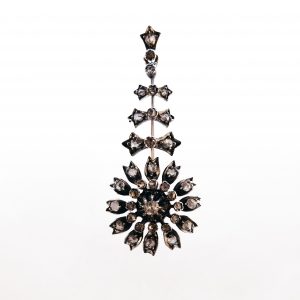 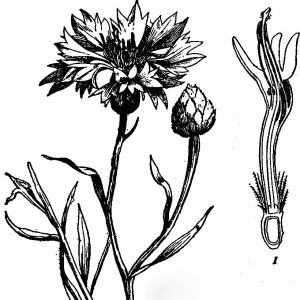 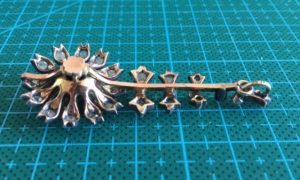 The great interest in botany and gardening in the early nineteenth century was reflected in the jewels’ naturalistic style. Sparkling flowers were also worn in the hair. This 19th-century diamond set cornflower pendant has a screw-fitting at the back, showing it was part of a bigger piece or set. Antique precious jewellery was often multifunctional; with detachable frames, the diamond-set flowers could be worn as a tiara, a necklace, or divided into smaller sections like brooches and pendants, bracelets,… Whatever would suit the occasion or the dress best.

Cornflowers have many links to history. In the period this pendant was made, the blue cornflower was identified with Prussia, partly due to the story that when Queen Louise of Prussia fled Berlin to escape Napoleon’s army, she hid her children in a field of cornflowers and kept them quiet by weaving them wreaths of these flowers. Cornflowers and poppies were often the only sign of colour in a devastated land, so, comparable to the Remembrance poppy worn in the UK and Canada, the Bleuet de France became a symbol of the armistice and a common symbol for veterans. 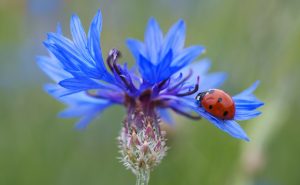 In the Language of Flowers, the cornflower symbolizes delicacy and timidity. It indicates that a message has a pure, innocent, or delicate intention. In Victorian England, dating websites didn’t exist, so young women wore a Bachelor’s button to signify that they were single. On the other hand, young men wore them when they were in love but unsure. If the flower faded too quickly, it was taken as a sign that their love was not returned.

The jewel-like colour named Cornflower blue is used to describe the tone of the most valuable sapphires. Sapphires generally have green or purple undertones, while a cornflower blue sapphire is said to be closer to “true” blue.  It’s sporadic to find an untreated sapphire of pure blue, thus these gemstones are particularly prized.