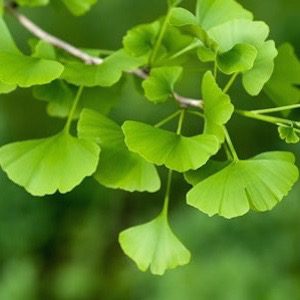 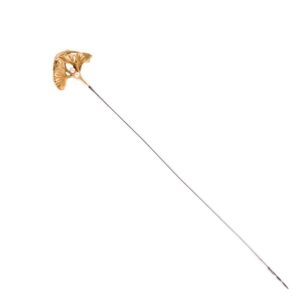 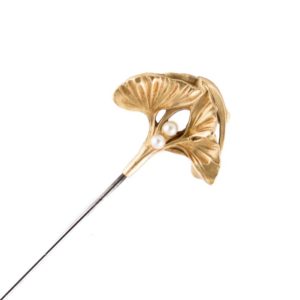 The art nouveau was an international style, often inspired by the curved lines of plants and flowers. The ‘total art style’ embraced a wide range of decorative arts between 1890 and 1910.

This art nouveau hatpin is decorated with two Ginkgo leaves in 18 karat gold. Not only the unknown maker or the previous owner of this hatpin found the Ginkgo to be a beautiful plant, but Evolution also appreciated its design, as fossils closely related to the Ginkgo have been unearthed, dating as far back as 270 million years. Recognizable ancestors appeared in the early Jurassic. In later periods, the tree disappears from the fossil record, except for a small area in Central Asia.

The Ginkgo biloba, also known as the maidenhair tree, owes its name to what is regarded as a misspelling of the Japanese term gin kyo: “silver apricot”, and a combination of the Latin words bis (two) and loba (lobed).

The Ginkgo is worshipped throughout the Far East as a symbol of hope, love, magic, immutability, timelessness and long life. 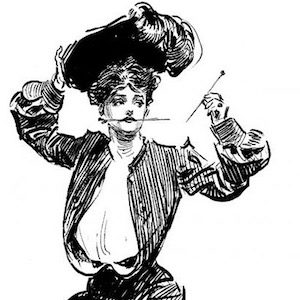 When the fashionistas from around 1900 started to secure their headwear with long hatpins,  pierced through one side and protruding several inches out the other, this practical and beautiful accessory also had the potential to be a dangerous weapon. Accidentally, or because women defended themselves with their long pins. After an incident in New York, in 1903, there were several reports of hatpin injuries. Link for a further read to an online article ‘With daggers in her bonnet’. Image “Hatpin girl” by Charles Dana Gibson (1867-1944).